The eurozone economies moved sideways in June, with the flash reading on the composite purchasing managers index (which covers both industry and services) for the 16 nation euro area rising to 44.4, fractionally above the 44 registered in May. So we are just where we were before, contracting more slowly than in Q1, but still contracting, and the fiscal bullet is now almost spent.

Not without importance was that the reading came in significantly weaker than the consensus expectation for a sharp increase to 45.3. So the market *has* been getting ahead of itself. 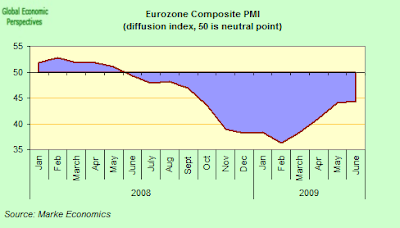 On the face of it, the index is now consistent with a quarterly drop in GDP of around 0.5 percent, well below the 2.5 percent fall registered in the first quarter. However - as Capital Economic's Ben May notes - "the index has recently been a poor predictor of growth and the hard data have painted a less upbeat picture."

The situation was broadly as expected on the manufacturing front - with a rise to 42.4 from 40.7, but this is still quite a strong contraction. On the one hand the improvement in the factory index is pretty generalized and so, with the new orders-stock ratio rising further, there should be further improvement in the coming months. On the other, given that this upward trend in the factory index is mostly inventory-driven, caution needs to be exercised in extrapolating the tendency to the whole economy. 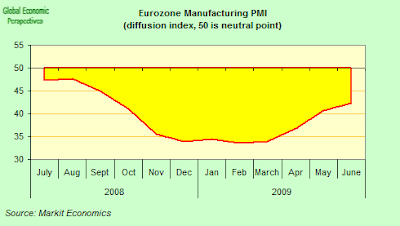 Ben May also points out that the drop in the services PMI from 44.8 to 44.5 suggests that fiscal and monetary stimulus measures "are yet to have a significant impact on domestic demand." Maybe we could rephrase that slightly, their bolt seems to have been shot without result, and the fiscal element, at least in Germany, Spain and Italy will now increasingly have a constraining impact. 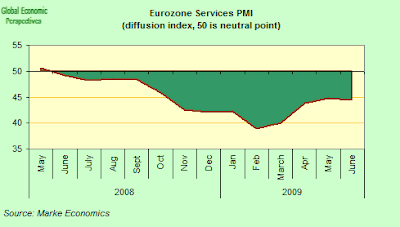 More worryingly, the rate of contraction in Germany's private sector accelerated slightly this month, with flash estimate of the Markit composite PMI falling to 43.4 from the seven-month high of 44.0 in May.The flash estimate for the manufacturing PMI index rose to 40.5 from 39.6 in May, but the flash services PMI reading fell to 44.3 from 45.2 last month. And in the manufacturing sector the ratio of new orders to stocks of finished goods fell back to 1.12 after rising to 1.18 in May. Which effectively means inventories started to rise again. 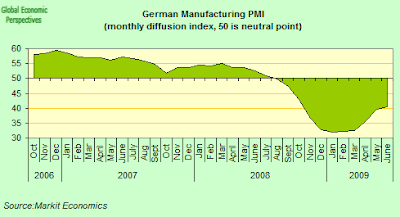 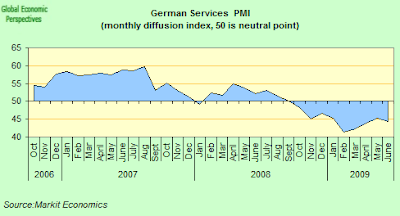 French Economy On The Mend

On the other hand, conditions in the French improved for the fourth straight month in June, helped by much slower falls in the level of new orders. The flash estimate for the Markit/CDAF PMI rose to 47.7 in June compared with 46.6 in May.

The key to the improvement - according to Markit - was a sharp jump in the composite new orders index, which hit 48.3 compared to May's reading of 45.3, suggesting that demand in the euro zone's second largest economy is steadily on the mend. "The composite new orders index is getting close to stabilisation. We're still very much on course for a strong easing and it does suggest that by the end of the year we could be seeing growth again in France," according to Chris Williamson, chief economist at Markit.

The June manufacturing PMI rose to 45.5 from 43.3, the slowest pace of contraction in activity since August last year. However, Markit cautioned against taking an overly optimistic view of the data, stressing that conditions in the French economy remain fragile, and recovery is likely to be unstable. 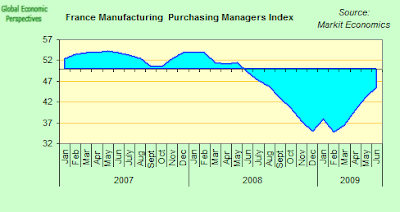 Just how fragile was emphasised by the fact that the services sector PMI slipped back to 47.5 from 48.3 in May, following three consecutive monthly increases. 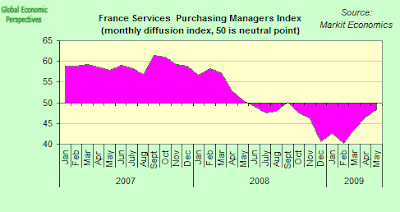 And just to underline the fragility part, we learnt today that spending by French consumers on manufactured goods fell in May, led by a sharp drop in purchases of clothing and household goods, according to the statistics office INSEE today (Tuesday). Consumer spending fell 0.2 percent month-on-month in May, well below a consensus forecast for a rise of 0.2 percent. Total consumption in May was down 1.6 percent compared to May 2008.

That having been said, I have no doubt, and unequivocally, to say that as far as I am concerned France is the strongest (or least weak) economy among the EU big five (France, Germany, the UK, Italy and Spain) at the moment.
Posted by Edward Hugh at 9:56 PM 5 comments:

Quietly clicking my way through Bloomberg last Sunday afternoon, I came across this:

Facebook Inc., the world’s largest social-networking site, said members registered new user names at a rate of more than 550 a second after the company offered people the chance to claim a personalized Web address.

Mein Gott, I thought to myself, if 550 people a second are doing something, they can't all be wrong. So I immediately signed up. Actually, this isn't my first experience with social networking since I did try Orkut out some years back, but somehow I didn't quite get the point. Either I was missing something, or Orkut was. Now I think I've finally got it. Perhaps the technology has improved, or perhaps I have. As I said in one of my first postings:

Ok. This is just what I've always wanted really. A quick'n dirty personal blog. Here we go. Boy am I going to enjoy this.

Daniel Dresner once broke bloggers down into two groups, the "thinkers" and the "linkers". I probably would be immodest enough to suggest that most of my material falls into the first category (my postings are lo-o-o-ng, horribly long), but since I don't really fit any mould, and I am hard to typecast, I also have that hidden "linker" part, struggling within and desperate to come out. Which is why Facebook is just great.

In addition, on blogs like this I can probably only manage to post something worthwhile perhaps once or twice a month, and there is news everyday.

So, if you want some of that up to the minute "breaking" stuff, and are willing to submit yourself to a good dose of link spam, why not come on in and subscribe to my new state-of-the-art blog? You can either send me a friend request via FB, or mail me direct (you can find the mail on my Roubini Global page). Let's all go and take a long hard look at the future, you never know, it might just work.
Posted by Edward Hugh at 11:48 AM No comments:

Well that so called investor "risk appetite" took a surprise hit yesterday (and from an unexpected quarter). It wasn't the worries about US fiscal deficits that caused the panic, but problems in the European banking system. Gwen Robinson reports:

Risk appetite suffered a sharp deterioration on Monday as fresh uncertainty about the global economy prompted investors to shift from equities, commodities and emerging market assets into the perceived safety of government bonds and the dollar. Markets were further unnerved by warnings on the economic outlook from the head of the IMF and an ECB report saying eurozone banks face another $283bn in writedowns on bad loans and securities this year and next.