Retail sales across the entire 13-nation euro region fell in November according to eurostat data released yesterday, dropping by 0.7 per cent from October to a level which is just 0.2 per cent higher than the Novemeber 2006 one. Of course this average hides considerable variance, with the weakest performances coming from Germany, Italy and Belgium.

But of particulr of note is the performance of retail sales in Spain (the zones 4th largest economy) since strong growth in Spain has previously offset weaknesses in Germany and Italy at previous critical junctures. But this time it will be different, since Spanish retail sales have fallen in both October and November, and while the year on year readings are still in positive territory, they will not remain there for long since the earlier strong readings will eventually drop out of the data. 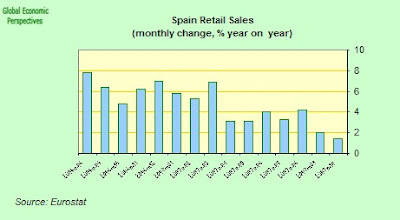 And since the spring the story in both services and manufacturing has been one of one long and sustained declined, as the data from the monthly Bloomberg/NTC Purchasing Manager Indexes reveal. 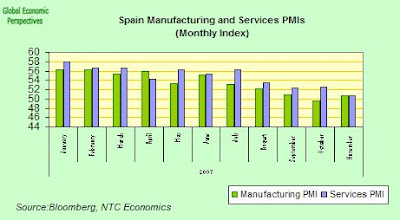 Meanwhile the consumer confidence index prepared by the Instituto de Credito Oficial continues to plummet the depths, registering at 76.1 in November a historic low for the third consecutive month. 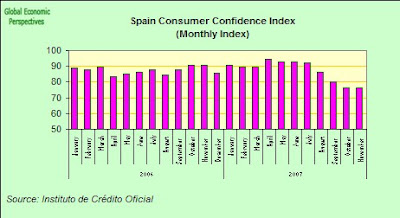 This drop in confidence is also reflected in the data for new mortgages issued (latest data still only September unfortunately), where the slowdown is clear if you compare the numbers for 2007 with those for 2006 (and especially since the spring, although my feeling is that when we get numbers for October and November we will see the slowdown accelerating, as buildings contracted in 2006 reach competion. Of course we should remember that those buildings and flats sold on the basis of architects plans in June and July - ie prior to the August sub-prime "bust" - will still be giving work until next summer, even if the would be purchasers may be increasingly looking for an "escape clause" as property prices steadily decline). 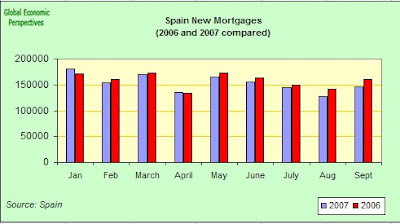 If we turn to the emplyment sub component of the Spanish index we will see that the outlook has changed dramatically in the last three months. 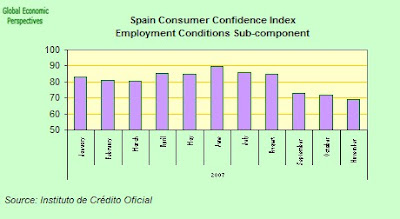 and the underlying situation again becomes clear if we look at the unemployment numbers, where a comparison between 2006 and 2007 is again revealing. We can see that in the early months of this year the employment situation was up over 2006. Then the situation turned (around July), and since then it is "down hill all the way" unfortunately. 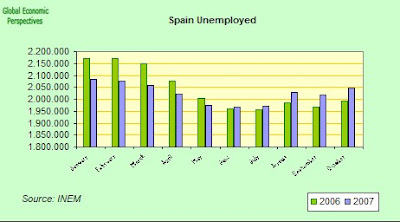