In this post I would just like to ask a very simple question. What is the real rate of growth of unemployment in Spain? Are things improving, getting worse, or simply staying the same? Now, before you jump to too many conclusions on this it is important to remember that in the world of economic analysis there are lies, damn lies, and then there are press releases.

So if you read in the headlines in your paper recently that the number of jobless in Spain fell by 20,794 in July after a 55,250 decline in June (cutting the total number of unemployment benefit claimants to 3.54 million), you might like - bearing in mind what I have just said - to ask yourself what else could lie behind such statistics? 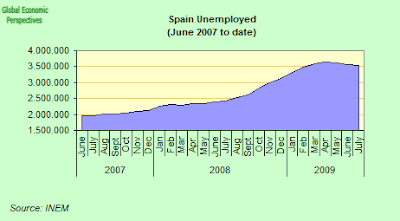 Well, if you look at some of the more informed commentary - say Reuters writer Paul Day - you will also note the little detail that "A huge public works programme in Spain slowed further layoffs in the beleaguered construction sector and helped unemployment claims to fall for the third straight month" - as a result of which the picture you have in your head may start change.

In fact, in the first six months of 2009, the Spanish government poured some 5 billion euros into local infrastructure projects as part of a total state-funded public works package worth up to 11 billion euros. Then you might notice the quote from PNB Paribas's Diego Fernandez -"'Keep in mind these figures are distorted by the fact that people taking state funded, back-to-work training courses are not counted"

But there is another little detail you should never forget, particularly in a country that has a lots of seasonally related employment, like construction, agricultur and tourism, and that is the lack of seasonal adjustment in the data. It is normal for unemployment to weaken somewhat in the summer. So if we look at the Eurostat data - scandalously Spain doesn't give a monthly unemployment rate to the public, and much less a seasonally adjusted one - we find that unemployment has gone up steadily from month to month, even if the rate of increase has weakened. The number of unemployed has now gone up every month since May 2007 in my Eurostat datasheet. That is 27 consecutive months of increase. And just wait till we get to the autumn! 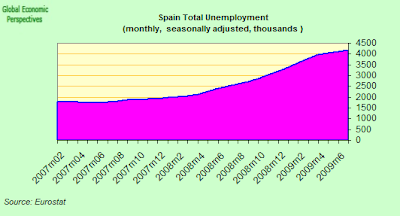 All of this is very curious, since the way the Spanish National Statistics agency report data to Eurostat, and how they adjust it, remains something of a mystery to me. The June published rate of unemployment is 18.1%. In fact the unemployment number shot up rapidly in the employment survey in March - to a then published 17.4% (source Reuters). This surge surprised me greatly at the time, since I could see no reaon why it should exist looking at the underlying speed of the economic contraction. I even contacted reseachers in the Bank of Spain -via a friend - to ask whether there had been some seasonal correction or something, and received the following reply:

Which is very very strange, since the data which are supplied monthly to Eurostat are being continually revised with every passing month at the moment (first up in March, and then down again, the current March reading is 17.2%), which is very acceptable, since seasonal corrections must be difficult at the moment, but it would be nice to have an explanation, since otherwise we might be lead to think that the EPA numbers shot up in March so the INEM numbers for April and May would come down, which they did. And those of us with really bad minds would remember that there were European elections in June. It would be ridiculous to suggest that these numbers were being massaged simply to give the impression unemployment was coming down, wouldn't it? 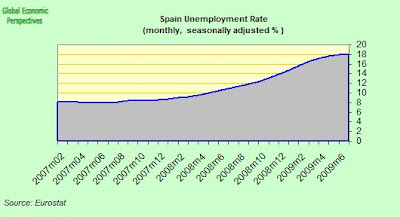 But as I say, the underlying seasonal trend as reported to Eurostat (but not revealed to voters in Spain) have continued to climb. Only in a country where the generally understanding of statistics is low could this happen, and pass un-noticed.

On the other hand, the rate of annual increase in the INEM numbers is definitely slowing - or if you prefer the second derivative has turned south, and the annual rate of increase has fallen back from a peak of 56.69 in March to 46% in July - which is hardly surprising since unemployment cannot go up exponentiallly (or there would soon be no one left working) and is also what you would expect to find when manufacturing is contracting less slowly, and significant numbers of people are being employed on public works or going on training courses. 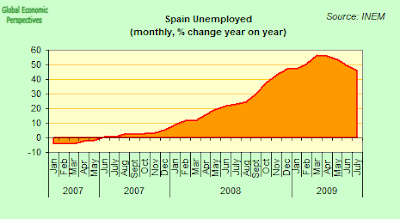 So the fact of the matter is, that the latest good data we have for Spain are the June unemployment data (supplied to Eurostat based on the EPA) which showed 4.186 million out of work, and an unemployment rate of 18.1%. And unemployment is rising every month, and that is the sorry and woeful tale of Spanish unemployment at the moment. That and my forecast that, if nothing is done to stop the runaway contraction, unemployment could be up and hitting the 30% mark come December 2010. 25% before Easter 2010 is now a done deal as far as I am concerned, and we will probably break the 20% psychological threshold in October or November of this year.
Posted by Edward Hugh at 7:41 PM

¿What can we do to solve this subject?

Wait for the IMF and the European Commission to arrive. I'm afraid at this point that is the only realistic expectation, since Spain's political system is evidently incapable of responding.

Late 2010, or the first half of 2011, I imagine. Relief will come, but it will be far from painless, since the gangrene will have a grip on the whole body at that point. Remember, this crisis started in Spain in September 2007. Tomorrow will be more or less the second anniversy, and always the same story - which I for one have never accepted - things will get better tomorrow.