Spain Unemployment May 2008 and the Worsening Real Economy

Unemployment rose in Spain last month for the first time in the month of May since 1979. The Spanish newspaper ABC notes in passing that the Spanish Economy Minister Pedro Solbes has finally managed to describe the situation as ‘serious’.

The number of people unemployed in Spain increased by 15,058 in May to a total of 2,353,575, according to the Spanish labour office INEM yesterday. The number of registered unemployed at the end of May was thus up by 0.6% from the previous month.

By sector, unemployment in the services sector was down 0.2% and also dropped 0.1% in agriculture. On the other hand, unemployment in construction was up 4.6% and was also up 0.8% in industry. 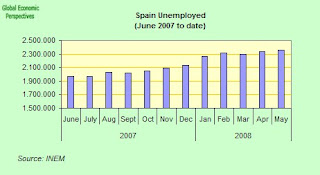 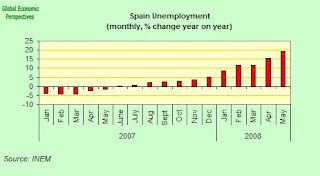 The OECD also forecast that Spanish growth will more than halve to 1.6 percent this year and fall to 1.1 percent in 2009 as Spaniards cut spending and public accounts fall into deficit, the OECD said on Wednesday. I think from everything we are seeing these numbers are too high, and I think if you look at the very serious outlook for the financial sector in the second half of this year (see this accompanying post here) it is very hard to be so optimistic about short term stabilisation. This is going to get worse, a lot worse, before it starts to get better.


The OECD also forecast that the knock on effects of the abrupt fall in house building will send 2009 unemployment to 10.7 percent from 9.7 in 2008. Again this is begining to look very optimistic from today's data. Unemployment on the EU harmonised methodology is already up around 9.6% and seems set to continue to rise. 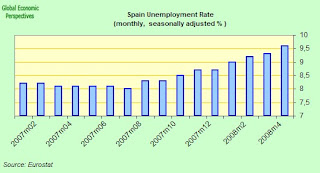 Also, perhaps here it is just as important to consider total employment as it is to think about unemployment, since so much of Spain's GDP growth in recent years has been labour input driven and not productivity driven. In fact total employment seems to have peaked in Q3 2007 at 20.511 million. The question is now just how far and just how fast is this going to come down. To get an idea the rate of increase has been dropping by the quarter since the maximum rate of acceleration with seemed to be a year on year 4.91% in Q1 2006. By Q1 2008 we were at a y-o-y increase of 1.66% and we are of course dropping. Since there is very little productivity change going on here the rate of change in the employed population will probably constitute a pretty good proxy for the rate of GDP growth. 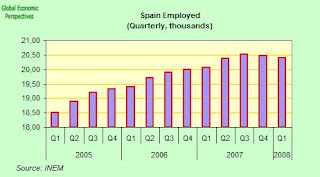 The OECD also forecast that Spain's public sector budget will fall into a deficit and be equal to approximately 0.3 percent of GDP in 2009, following five years of surpluses, due to a 10 billion euro economic stimulus package, lower tax receipts and higher infrastructure spending. They anticipate the economy will be sluggish for 18 months (I think we are into something much longer term than this).


Spain's inflation, which is currently among the highest in the euro zone at 4.7 percent, should finish 2008 at 4.6 percent before easing to 3 percent in 2009, the OECD said (this may well be much more realistic). 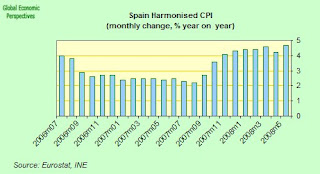 Credit growth will ease as Spanish banks, especially small savings banks or cajas, struggle to raise external capital. House prices will feel downward pressure as more new homes enter the market with construction firms finishing off the large number of housing projects begun in 2007. Investment in machinery and equipment, one of the most robust areas of the Spanish economy, is expected to contract on weaker demand, waning confidence and more restrictive financial conditions the OECD said.


Spain's current account deficit, the world's second largest (after the US) in absolute terms in 2007, will remain around 10 percent of GDP over the next two years as higher import prices and external debt service payments offset a fall in imports and slightly stronger exports. 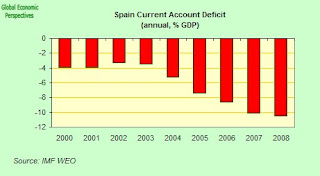 
Spain's consumer confidence index fell again sharply to 56.4 in May from 63.8 in April, the lowest level since the indicator began in September 2004, the state financing agency Instituto de Credito Official (ICO) said.

The indicator looks at consumer confidence in the current economic situation and future economy in terms of the country, the home and employment. 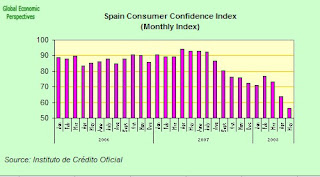 The index May figure reflects declines in all categories from April, with sentiment on Spain's economy down 6.7 points, on employment down 2.8 points and on household economy down 6.2 points.

Consumer confidence was 39.3 points lower in May from a year earlier, when the consumer sentiment index stood at 93.0. 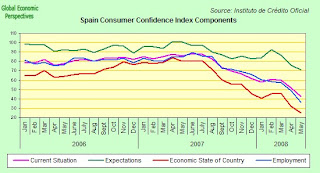 There is also increasing evidence of a widening divergence between the big four economies in the 15-nation eurozone with Germany and France continuing to prop-up a contracting Italy and a Spain which is in "free fall". This divergence is only going to add to the headaches over at the European Central Bank, which is already pretty worried about the continuing high inflation. After a drop in April, the Business Climate Indicator (BCI) has stabilised in May. The Economic Sentiment Indicator (ESI) remained unchanged in the Eurozone at 97.1. 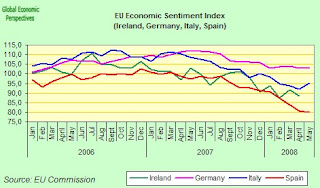 Spanish car sales fell almost a quarter in May, offering further evidence the Spanish economy is cooling far faster than expected, but French sales were up, bucking weak consumer confidence, and sales in Belgium also rose.

Spanish dealers sold 116,108 units in May, 24.3 percent fewer than a year ago, industry body ANFAC said on Monday.


Spain's retail sales fell 3.4% in April and continue to fall. 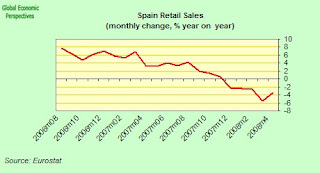 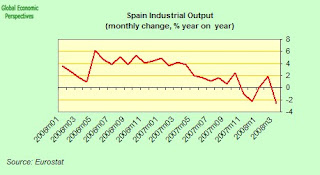